The Fearnots Fire Company recently acquired a 1997 Pierce Saber Squirt.  The Squirt replaces a 1991 Pierce known as “Engine 49“.  This is the first aerial apparatus owned by the department.  The 50 foot boom will be used to supplement aerial operations on the fireground.  The pump is capable of flowing 1250 gpm, has a 500 gallon tank and carries 600 feet of 5 inch hose.

The Squirt will provide the department with a 50 foot apparatus mounted ladder, capable of a 500 pound “tip load” and the ability to flow 1000 gallons per minute from a remote controlled nozzle.  The ladder is capable of being set up by one firefighter in less than 2 – 3 minutes.  The nozzle can be controlled from the ground, or the ladder tip, and can be rotated 90 degrees upward.  The Squirt is 2 feet shorter than the engine it replaced and provides for a tight turning radius and ability to get in tight spots, such as alleys and rural driveways, where conventional ladder trucks can’t reach.

The apparatus was originally equipped by us with full set of rescue equipment, including the “Jaws of Life”, cribbing and airbags.  However, the rescue equipment was moved to Engine 1 in 2012.  The decision was made to replace Engine 49 during the first part of 2007.  The opportunity allowed the department to obtain a newer apparatus, with more compartment space and add an aerial device for a fraction of the cost of a new pumper.  The Squirt was formerly owned by Fillmore Fire Department in California where it served as as an ALS Engine. 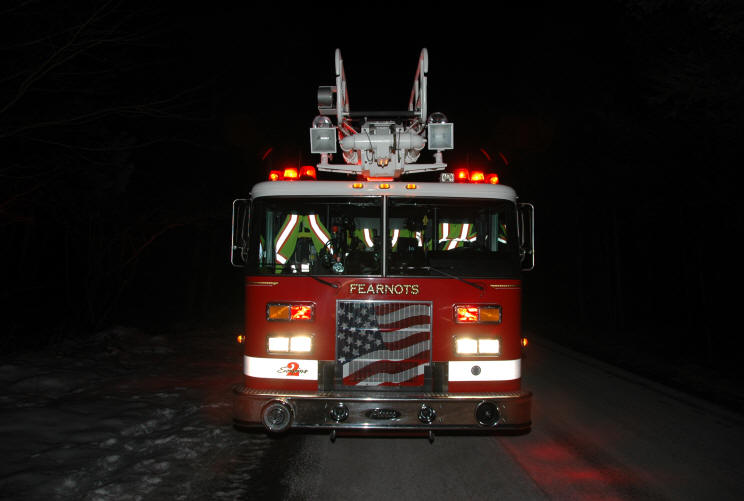